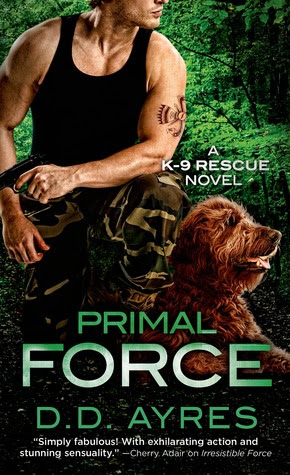 Description via Goodreads:
Passion is always worth fighting for…

Jori Garrison trains dogs for Warrior Wolf Pack, which provides service animals for disabled veterans. Four years ago, she was wrongly convicted of a crime—thanks to her no-good ex-fiancé. Now she just wants to live her life in peace with her beloved dogs. No men, no complications. But it’s hard to play it cool when a lethally hot male is on her tail—and the attraction is fierce, mutual, and dangerous…

Lauray "Law" Batisse is a Military Police veteran who was wounded in Afghanistan. Haunted by the loss of his K-9 partner in combat, he’s reluctant to accept a service dog named Samantha into his life. But once he meets her trainer—the gorgeous Jori Garrison—he can’t fight his primal instincts. And neither can Jori. This sexy alpha male might be the only man strong enough to unleash her desires. And when unseen enemies start hunting them down, he and his new K-9 partner might be her only hope… to survive.

A story about a SEXY as sin, HOT as hell wounded warrior/cop and his K-9 partner? I wouldn't miss this one for anything!! Miss Ayres has made a lifelong reader of me!
Miss Ayres knows how to combine a wounded vet coming home to try and reintegrate into civilian police work, a strong, smart, loyal K-9, and a strong, stubborn, determined woman into a story that will melt your heart! Her writing has style and class.
She weaves a realistic tale of a broken, but proud man determined to come home from a war that changed him physically and mentally and go back to the independent, kickass cop he was before he went off to answer the call of his nation and a strong determined woman working on a second chance at life. She never once makes the reader feel sorry for Law or Jori. It is all about the chemistry between the lead characters and action. It becomes impossible to put the book down.
I must admit that I fell head over heels for Law. He had the perfect combination of stubborness, drive, pride, and caring for others that a military man/police officer should carry. I should know. I am blessed to be married to a dual career retired Army Officer and retired Police Officer.
But let me talk about the wonderful surprise Miss Ayres added to the story. She added a third voice to the story. She added Samantha, the "cheese doodle's" voice. We get a glimpse into what the dog thinks and feels. I LOVED finding out what was going through Samantha's head periodically throughout the story. It defined the bonding between K-9 and soldier.
If I were to sum all of this up, I would very simply say "You have GOT to get read this book. End the year on an awesome note!
I received a free copy of this book for an honest review.
Posted by Unknown at 8:27 AM No comments:

Branded for You (AudioBook) by Cheyenne Mccray 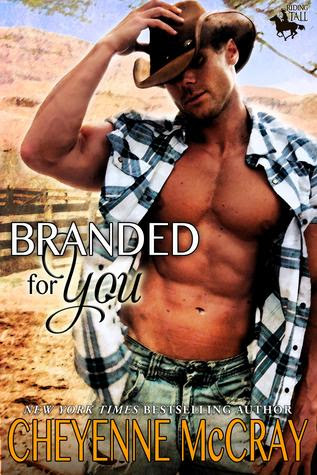 Hi everyone. This review is less of a review of the book and more of a review of the Audiobook that is narrated by David Quimby.
My opinion of this story has not changed since I reviewed it in August of 2014. But let me revisit my review:
What can I say? Cheyenne McCray delivers a HOT cowboy and a great story to go along!
Cheyenne McCray is well known for her stories that are big on seriously HOT cowboys, seriously HOT  sex, and a woman that can more than handle all that HOTNESS!
Branded for You is no different. I was a little bit surprised, in a good way, that the book started out in a gentle, easy-going manner. The story is about a young woman who moves to an area right outside Prescott, AZ that has a gentle, easy-going lifestyle. I enjoyed that fact that the tempo of her story followed what was going on in the story. But don't think for a minute that Miss McCray changed her style of writing. Oh no!! She jumps in with both feet at the exact right time, but the story's tempo goes back and forth from slow and easy, to fast, HOT, and steamy!!
Another specific thing that I enjoyed about this story was the fact that Megan was not the cookie cutter, size 2 woman that the hot, sexy male falls in love with. Megan is described as at a curvy woman. I personally get so tired of Hollywood's unrealistic expectation of what a sexy woman looks like. Miss McCray had the guts to go outside the "norm" and have a hot, sexy man fall for a healthy woman. Kudos to Miss McCray!!
Now, let me get off my little soapbox and get back to the important things: Miss McCray is a seasoned writer who knows exactly what it takes to draw her readers in, grab them by the hormones and keep them wanting more!! Miss McCray is a pro and a damn good one!
All right, let's get into the narration. Mr. Quimby is a very articulate, well-enunciated narrator. There is never any difficulty understanding what Mr. Quimby is saying. He attempts to create a different "voice" for each character, but in my opinion it is a little weird to hear an older gentleman attempt the voice of a little girl or a 30-something woman. I also had a little difficulty picturing Ryan as a hot, muscular cowboy when the dialogue came from a man that sounded to be in his mid to late 50's or older. For me, it is important to be able to have a running "movie" in my head as I read.As I listened to Mr. Quimby, I found that very hard.
I recommend that everyone give the audiobook a try. Why? Because each person enjoys books and stories differently.

Delta Force: The most dangerous elite counter-terrorism force on the planet
• The deadliest shooters •
• The most out-of-the-box thinkers in any military •
• Will die to get the mission done •

If the training doesn’t kill them, their passion may—but Kyle Reeves and Carla Anderson blast right in. Show no fear. Have no fear. Then they get the call. The most powerful drug-smuggling ring in Venezuela needs a takedown, and Delta’s newest team leaps into the deep jungle to deliver. Giving their all? Not a problem. Giving their hearts? That takes a new level of courage.

Let me tell you about this book that I could not put down. It was totally AWESOME! And as I read it, I could not believe it was written by a MAN!! Yes, it's a little sexist, I know.  But seriously, most romance writers are female! Mr. Buchman takes what I call "action-adventure, romance" to a whole new level!
A woman Delta Force? I love how Mr. Buchman stepped outside of the box.
Mr. Buchman has done women proud everywhere! Carla is a strong, self-sufficient, kick-ass woman who falls in love with a man who loves her independence, strength, and sexiness. A man who wouldn't change one tiny thing about her.
Is it realistic? I think so. Mr, Buchman seems to have done a lot of research. He really tapped into the importance of teamwork, camaraderie, and working as one.
What about the romantic/sex scenes? Well, he got those down to a science also. They aren't as drawn out and described as most of the female romance writers, but there is plenty of descriptives to get your libido piqued.
Best of all, that isn't everything. He is big on action! This could easily be made into an action-adventure just based on the blow up, capture, evade, and military training portion of the story.
But, what about the character developement? Well, he draws you in and makes you fall in love with all of the Delta Team. Mr. Buchman has used this story to introduce each member of the team. While he doesn't go all out in developing each character, he sets the background with enough information that lends you a glimpse into who they are and helps you to want more.
I am so stoked to read the next installment in his First Women of Delta Force series!

Want to see what all my hype is about without buying the book? Here is a link to get a taste:
First few pages of Target Engaged

Want to win a set of Mr. Buchman's books? Visit this link:
http://www.rafflecopter.com/rafl/display/54ca7af7247/

This is a story that you MUST read! I promise, you won't be able to put it down!

Posted by Unknown at 7:22 PM No comments: