When You Touch Me by Marilyn Baxter

Family woes bring Jillian Logan home to Mimosa Key, but she faces more trouble in her new job as a massage therapist at the Casa Blanca Resort in Barefoot Bay. Right away she’s given a special assignment: a wounded soldier who is a good-looking player with sex appeal and who threatens to throw her delicately balanced life off-kilter.

Sam Hartman, AKA Hart Throb, views the beach as just another sandbox all too reminiscent of the hellhole where he was injured. And the alternative therapies that Jillian offers him? He considers them pure voodoo. He would rather move their relationship off the massage table and into his bed, but as much as he wants her touch, it forces him to face the demons that still haunt him. Can the heat of their unlikely connection heal them both?

This is a special book. It is a collaboration, in a way, between two awesome authors. Roxanne St. Claire has opened her fan-favorite world of Barefoot Bay to a select number of romance authors. Marilyn Baxter is one of those talented writers.
\Marilyn introduces us to two very different, yet similar characters, Jillian and Sam. They have both sacrificed a large part of who they are for their family. For Jillian it is her sister. For Sam it was a brother-in-arms. But Sam is suffering from a wartime injury, both physical and mental. While Jillian has found her peace in being a healer who believes in the power of her hands.
Jillian is a talented masseuse who finds herself back in her hometown, the beautiful Barefoot Bay. She is offered a job that allows her to focus on one client, a hero, a wounded warrior. Jillian is determined to maintain a professional relationship with Sam while Sam is determined to be as unprofessional with her as possible.
As I have said before, a military hero is one of my biggest weaknesses. Marilyn creates a perfect mix of hot male, wounded soul, and hidden vulnerability in Sam. He may be all masculinity, but inside is a child crying out for help.
And Jillian? Well, she is a woman who is empathetic and caring. Her goal is to help this wounded man and his body get well again. But he fights her every step of the way. This she can look past because of his injuries, mental and physical. But, she can't fight the attraction he evokes in her.

Marilyn has done Roxanne proud. She has brought two of her characters and placed them perfectly inside Barefoot Bay. She stays true to the essence of the world that Roxanne has created. I was kept enthralled by the relationship between Jillian and Sam. There is no way to skim over the fireworks, both sexual and hostile, that fly between Sam and Jillian. You can't help but fall in love with the characters and the Bay.
In reality, if this is the first visit to Barefoot Bay for you, you will definitely want to hurry back. If you have visited Barefoot Bay with Roxanne, you will want to visit again with Marilyn. This is a MUST READ!

Posted by Unknown at 8:04 PM No comments: 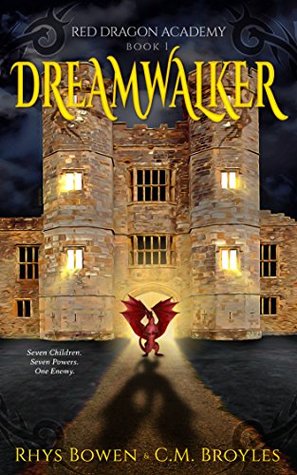 Addy is a typical California surfer girl until her mother dies and she is sent to a strange boarding school in Wales, where one hallway leads not to another part of the school but to another universe. Addy has always had vivid dreams. Now it seems this power to dream has made her the enemy of the powerful ruler of Gallia.

How can Addy and her new friends be any match for the powerful Grymur who calls himself The One in a world where nothing makes sense.

This story is classified as YA. But boy am I glad you don't have to be a young adult to read this book. (I passed that age more than a few years ago)
I saw where this story has been compared to the Harry Potter books. I couldn't see why, though. It is definitely in the same league, but it is a story all it's own.
We are introduced to Addy as she is being thrust into a different life across the pond by the death of her mother. We get to follow Addy as she finds herself in a new school, trying to make new friends, and stumbling into a whole different worl. A world where she is considered evil and must fight to get back home. It is so hard to write a review for this story. I want to say so much, but then I would be spoiling the story.
Addy is sent to a boarding school by her aunt. Here she becomes friend with six other students. Students with special abilities like Addy. But none of them know about these abilities until they find themselves in situations where these abilities are required to keep them alive.
I really enjoyed reading the story and found it very difficult to put down (darn work! darn sleep! darn responsibilities!). This mother-daughter writing team has created a hit series that both kids and adults will be unable to get enough of.
Personally, this has become one of my top 5 favorite series. When does the next one debut?!!!

Disclaimer:
I received a free copy from Netgalley in exchange for an honest review

Posted by Unknown at 4:56 PM No comments:

No One Knows by J.T. Ellison

The day Aubrey Hamilton’s husband is declared dead by the state of Tennessee should bring closure so she can move on with her life. But Aubrey doesn’t want to move on; she wants Josh back. It’s been five years since he disappeared, since their blissfully happy marriage—they were happy, weren’t they?—screeched to a halt and Aubrey became the prime suspect in his disappearance. Five years of emptiness, solitude, loneliness, questions. Why didn’t Josh show up at his friend’s bachelor party? Was he murdered? Did he run away? And now, all this time later, who is the mysterious yet strangely familiar figure suddenly haunting her new life?

This book has got what it takes to keep the suspense-loving reader engrossed! Miss Ellison knows how to transport the reader to Nashville and see the sights, through her eyes of course.

Aubrey's story is an exercise in emotions. Miss Ellison transitions the reader from the present to the past throughout the story. Where most writers confuse the reader going back and forth, Miss Ellison makes it feel like this is the only way to tell the story.
And the emotions these transitions evoke in the reader are pretty intense. The reader feels sorrow, joy, antipathy, empathy, and shock just to mention a few.

I love a well-written suspense novel. While Aubrey is trying to get her life back on track after being falsely accused of murdering her missing husband, her mother-in-law is doing all she can to get him declared dead. Aubrey is easy to like and this keeps the reader strongly in favor of Aubrey no matter the situation. And her mother-in-law? Well, let's just say she is very easy to dislike.

What did I like most about the story? Well, just as I thought I had the plot figured out, BOOM!  the story would take a twist and I would have to start all over again trying to figure out who or what was responsible for all the angst. The ending? Well, let's just say I never saw it coming.

I received a free copy through Netgalley
Posted by Unknown at 3:22 PM No comments: