The Circle Complete by KM Montemayor 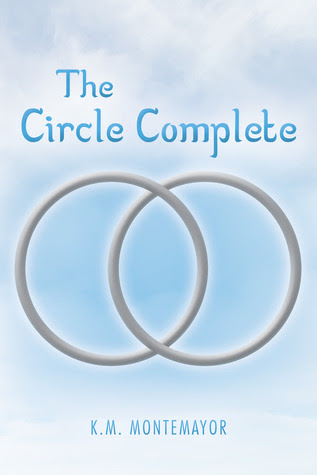 This is the final chapter in Lily and Charlie's journey.

Charlie has found his way back to earth and to Lily. Now he has to convince her that he truly loves her and that she still loves him. Her anger, confusion, and shell around her heart makes it hard for her to trust Charlie. So many lies, so many years.
There have been many books where the writer has gotten to the "happy ending" and then seems to run out of either story or energy to expand the ending. Not Miss Montemayor. She developed a wonderful twist that will keep you hooked until the very end.
I know this is a short review, but I can't say too much without giving away the "secrets".
I loved this whole trilogy until the very end and I think you will too!

Posted by Unknown at 7:09 PM No comments:

The Circle Broken by K.M. Montemayor

Without Charlie, Lilly can find no reason to live. She throws herself into her studies and eventually becomes a doctor. But hiding behind her career doesn’t work. Despite all her efforts to forget the past, she still finds herself haunted by her memories of him. Charlie's decision to be with Lilly has cost him his freedom, and perhaps his sanity. His doctor finds his aberrant attraction to an Earthan fascinating and begins to experiment on him. The unorthodox treatment methods take a toll and Charlie finds himself questioning everything he ever believed about Lilly. A rebel group is gaining power on Sentria. The New Way promises the people more control over their own lives. Will the people finally be able to have freedom? Is that even a possibility for a planet who has been oppressed for centuries?

This is Book 2 of The Circle. Charlie and Lilly's story continues.

Lily is left on earth thinking Charlie is dead while Charlie is on Sentaria being tortured. Charlie is considered mentally ill because he thinks his One is an Earth girl. He is sentenced to 10 years in a mental hospital. His doctor and nurse utilize Charlie to try and make a name for themselves. While Charlie and Lily are miserable and trying to live without each other, a new, radical group is conspiring to overtake the Sentrian government.
Miss Montemayor keeps the momentum going in The Circle Broken. It is almost impossible not to feel sad for Lily. Here she is living with the lie that the "man" she loves is dead. She mourns, suffers, and tries hard to continue living.
Miss Montemayor's detailed description of Charlie's torture and suffering makes it impossible for the
reader NOT to feel horror and anger at what he suffers. As a matter of fact, I wonder how she came up with everything he went through. Hmmmm.
All I can say is you can't read book 1 and not go on to book 2.

Happy Reading!
Posted by Unknown at 6:57 PM No comments:

The Circle by K.M. Montemayor

He was created for only one person. She was never supposed to be the One. It is 1988 and Lilly, a shy high school senior with a non-existent social life, is forced to live out her romantic fantasies through the fictional characters of her books. That all changes when she issues a spur of the moment invitation to the strange new kid. The world Charlie comes from is much different than Earth. Almost every aspect of a Sentrian's life is under complete government control. There is only one right the intrusive authorities may not violate: that God chooses your soul mate. While on his planet, Charlie never found his One, so when he develops an attraction to Lilly, he is torn. Should he ignore his feelings for the Earthan, or pursue a doomed relationship with the only girl he has ever cared about? His contact with Lilly does not go unnoticed. Involvement with an Earthan is considered blasphemy, and Charlie is condemned as a criminal of the state. The couple is faced with a difficult choice: accept eternal separation or risk everything to stay together.

I received a copy of The Circle in exchange for an honest review.

This story caught my interest. I mean, a sci-fi (in my opinion when I read the blurb) love story that takes place right after I graduated high school, I was in! Well, it ended up being a story that crossed genres. For me it was a sci-fi, paranormal romance, YA, and contemporary romance all wrapped up in one.
Well, it took a little while for me to get into this book. It was slow going at first. Miss Montemayor started out giving the back story (or, that is what it seemed to be for me) of the two main characters. I really felt that she could have incorporated a lot of that info into other parts of the story. But, once I got into it, the story really took off!
I like how Miss Montemayor created Charlie and the Sentrians to be different, yet the same as us Earthans. Charlie was so similar to Lily that unless you really got to know him, you wouldn't know anything about him was different. She actually took pages out of our own history to help create the Sentrian's opinion of Earthans. Prejudice is supposed to be at the core of all Sentrians. But then Charlie comes along and challenges that mandate.
Lily is a sweet, young teenager who has been forced to grow up at an early age. All she has is her single mom, a nurse who works a lot to make ends meet. She knows who she is and what she wants. She is a senior in high school who has taken a few younger students in band under her wing.
When Lily and Charlie meet, they fall in love. For Charlie, it isn't allowed. For Lily, Charlie is her first boyfriend.
Miss Montemayor does great job developing their relationship.. She keeps it on a teenage level. The ups and downs are very realistic (at first) of teen angst, and then develop as Lily learns more about Charlie. She keeps her references to the '80s constant and relevant.
I found myself rooting for Charlie and Lily. I even found myself trying to help Charlie figure out how to be more like an Earther when Lily would get mad or frustrated at him. I got so into this story, that as soon as I finished The Circle I bought the next two, The Circle Broken, and The Circle Complete.

Check this one out! Happy Reading!!
Posted by Unknown at 5:16 PM No comments:

First of all I want to apologize for being out of the loop for awhile. I was working on a few projects at work. But thankfully I am back reading books and ready to dole out my opinion. I hope I can help you find a book or two to read and enjoy.﻿
Synopsis via Goodreads:
Growing up with an unstable, often absent father who preached about the end of the world, Jenna never thought in her wildest nightmares that his predictions would come true. Or that he would have a plan in place to save her-one that includes the strong, stoic man who kidnaps and takes her to a remote cabin in the Pacific Northwest.

The mysterious ex-Marine named Mason owes a life-debt to Jenna's father. Skilled and steadfast, he's ready for the prophesied Change, but Jenna proves tough to convince. Until the power grid collapses and mutant dogs attack-vicious things that reek of nature gone wrong.

When five strangers appear, desperate to escape the bloodthirsty packs, Jenna defies her protector and rescues them. As technology fails and the old world falls away, Jenna changes too, forever altered by supernatural forces. To fight for their future, she and Mason must learn to trust their instinctive passion-a flame that will see them through the bitter winter, the endless nights, and the violence of a new Dark Age.
Nightfall is actually a throwback for me. I found it on my bookcase when my husband moved things around in the garage. It seemed vaguely familiar, but I couldn't quite place it. So I picked it up and delved right in. I remembered bits and pieces, but for me that is unusual. I can usually get to about the 5th page of a book I have read and it all comes back to me.
Nightfall was copyrighted in 2011. So a 4 year old book isn't that old. Berkeley Publishing cast it under their Paranormal Romance category, but for me it was more of an Urban Apocalyptic Survival story. I love to read about people surviving in a world that has gone totally wonky and haywire. (Can you guess I am an avid Walking Dead viewer?!)
Nightfall is the first in the Dark Age Dawning Series by Miss Connor. This is Jenna and Mason's story. Miss Connor has an AWESOME mind for taking our everyday world and recreating it into a living hell. She has created monsters from the ordinary people who looked each other in the eyes. I like how she took different types of people and had them effected differently by the "change".
I like how Miss Connor takes a dysfunctional family and turns it into an important survival factor. And a boy, who is raised in the typical, abusive foster system, finds his way to a "cult" and survives because of the dysfunctional way he was raised.
Miss Connor has taken the concept of yin and yang to the extreme with Jenna and Mason. Together they band a group of people into a unit and teach each other what it really takes to survive. But unlike most stories, this hero and heroine do not come out unscathed. But they do come out stronger and more balanced.
Miss Connor weaves the action, turmoil, human angst, and typical stress together to create a story that hits home with the reader. Yes, the details of the story may be a little "out there" (or could they?), but the fact that we could find ourselves in an apocalyptic event makes this story a little more "edge of your seat".
I look forward to looking into the other books in this series. Miss Connor is definitely an author that has gained my attention!
﻿
Posted by Unknown at 3:48 PM No comments: