On Her Watch by Rie Warren 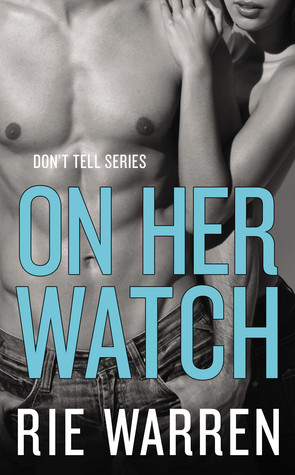 I received a copy of On Her Watch for free in return for an honest review. Thank you to Miss Warren, and Forever Yours Publishing for this opportunity.

War is raging in the InterNations Territories and within Lieutenant Liz Grant’s heart.
AWOL from her post for several months, Liz is on a mission to infiltrate the Beta Corps military, desperate to find out who murdered her father and turn the revolution in the insurgents’ favor. Commander Linc Cutler stands in her way. Coldly handsome and in control, his desire for her causes a crack in her deep cover.She’s certain he holds the key to her past as well as her future, but Linc has pledged his allegiance to the oppressive Company regime headed by his father. Through escalating intrigue, espionage, and runaway passion, Liz is thrust into an impossible situation.Lives, the Revolution, love at stake, it all comes down to the one man Liz shouldn’t trust.

On Her Watch is actually Book #2 in Miss Warren's Don't Tell series. But from my experience with this book, they are stand alone books. I did not read the first book and did not have any difficulty keeping up with the story line in On Her Watch.
This is somewhat of a difficult review. While I did not find anything technically wrong with Miss Warren's writing, I did not find anything spectacular about it either.
While On Her Watch is Liz and Linc's story, Miss Warren deliberately wove their story around the story lines of her gay characters. Miss Warren took the plight of same sex couples into the future, but in her future they are paying the ultimate price for being who they were born to be. She has created a future by using a page out of reality's history. In her story Miss Warren has created another Hitler, but this one has been born from the United States. This Hitler is ordering genocide of everyone who is gay. But in her future, people, both gay and straight, are standing up and fighting for their freedom to love whomever their heart desires.
So, the blurb may say the story is about Liz and Linc, it is really about the fight for people to love whomever they want to love.
This story was predictable and average. Miss Warren did a good job of creating a world full of turmoil and people willing to fight for what they believe in. But unfortunately it wasn't a story that really stood out.